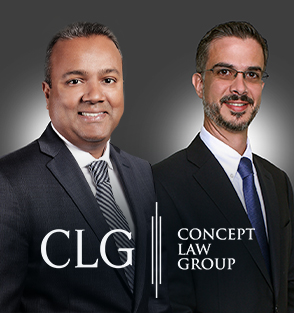 Under a new five-year agreement, Santos will continue as President and Chief Creative Officer of iHeartLatino as well as morning host on his  Spanish nationally-syndicated show originating from TÚ 94.9 in Miami and host of his English weekly nationally-syndicated radio show “On The Move with Enrique Santos.”

Santos was represented in this negotiation by Michel Vega, CEO of Magnus Media, and Attorney Alexander Brown and Ravi Seepersad of The Concept Law Group, P.A.

Attorney Alexander Brown is reknown for negotiating employment and other media agreements with the largest media and entertainment companies in the United States, including with iHeartMedia, Inc. (f/k/a Clear Channel Communications, Inc.), Univision Communications, Inc., and Spanish Broadcasting System, Inc., to name a few.  Mr. Brown has also appeared on a variety of nationally syndicated television and radio shows to discuss cutting edge issues in sports, entertainment, and media law.

In the courtroom, Mr. Brown has achieved more than $60 million in jury verdicts, settlements and final judgments.  Amongst his jury trial victories are two that garnered Mr. Brown the recognition of Most Effective Lawyer in 2010 and 2012 by the Daily Business Review’s Annual Most Effective Lawyer publication. And, in 2013 Mr. Brown was named among the ALM Daily Business Review’s 2013 Rising Stars, a list recognizing Florida’s 40 most promising lawyers under the age of 40 who have “wielded influence in their practice areas in South Florida and beyond.”  In 2016, Mr. Brown helped negotiate a confidential settlement on behalf of his client, Uber Promotions, Inc., in a trademark lawsuit brought against Uber Technologies, Inc. wherein Mr. Brown and his team argued that his client had superior rights to the Uber trademark.  Mr. Brown has been involved with many other cases as trial counsel where he has handled issues ranging from insurance coverage disputes to false advertising claims, federal Lanham Act claims, trade secret misappropriation claims, as well as trademark, copyright and patent infringement claims.

There are very few, if any, other attorneys currently in private practice anywhere in the nation, with Mr. Seepersad’s level of hands-on experience in negotiating, drafting, and enforcing legal agreements between colleges and universities and companies that support the same.